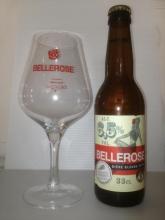 After Paris, London and Tokyo, it was the turn of Melbourne in Australia to recognize excellence and innovation made by the BELLEROSE beer in the world of craft beers. End of last month, the ceremony award of the Australian International Beer Awards was taking place and we won the silver medal in the Best Belgian & French Style Ale - Saison Category.

Brasserie des Sources being the only French breweries attending the 2013 edition of the AIBA makes BELLEROSE the unique awarded French beer !!! It is another award showing that Bellerose matters in the beer world. Two golds at the 2012 edition of the IBC (International Beer Challenge) in London and one gold in Japanese International Beer Competition in Tokyo, proves that consumers are ready to have a beer that combines the IPA style with our very own French magic. We are sure consumers will follow the international beer trend, always looking for more original and hoppy flavors, and so, enjoy our Bellerose. All the efforts and investments we have made during the past year are now being rewarded and it is just the beginning... Congratulations and long life to Bellerose!!! 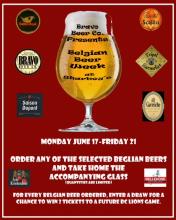 Serving incredible Belgian Beers including delicious cask draught with their awesome menu and giving away a lot of swag.  NOT to be missed. 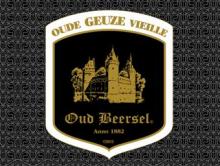 nternational Beer Awards (AIBA), organized by the Royal Agricultural Society of Victoria, continues to grow in both entry numbers and world wide reach, firmly establishing itself as the pre-eminent showcase of beer and brewing excellence in the Asia Pacific region and as one of the most important beer competitions in the world. A record number of entries were received in 2013. Over 1,480 beers were received from more than 230 brewers in 35 countries.

Gert Christiaens of Oud Beersel brewery was taken by surprise when he heard the news: “In the past our Oude Geuze, as well as some of our other beers, has won several awards in international beer competitions. However, it is the first time that apart from the title in a particular category we are also awarded an international top award. This recognition shows that the traditional lambic beers from the Payottenland and the Senne Valley belong to the league of the world’s best beers.”

When Gert re-opened in 2005 the brewery that had closed down a few years earlier, his aim was to safeguard the traditional lambic beers for future generations. The past years, he invested a significant amount of money and time in the quality of the Oud Beersel beers. This year, Gert acquired 55 oak barrels of 600 litres and three massive wooden barrels of 3,800 litres each. Oud Beersel will also take a new barrel maintenance system into service.

The traditional lambic beers are in high demand, both in Belgium and on the other side of our planet. "It is heartwarming to see that our commitment to the lambic beers is appreciated and that Oude Gueuze is named as the best beer across all beer styles worldwide. This is a tribute to all lambic brewers who have made from their passion their life's work," says Gert.

Oud Beersel, located in Beersel (near Brussels, Belgium), was founded in 1882. Late 2002, the brewery was threatened in its survival by a lack of succession in the family enterprise. In 2005, Gert Christiaens took over Oud Beersel and resumed the brewing activities with respect for tradition and craft. Nowadays, Oud Beersel is producing Oude Lambiek, Oude Geuze, Oude Kriek, Bersalis Tripel, Bersalis Kadet and Framboise. Since 2006, Oud Beersel is a member of HORAL (High Council for Artisanal Lambic Beers).

In the Belgian Strong Ale category, Nostradamus won bronze at the Calgary Beer Festival May 3 & 4 2013. Great nod to a great beer. 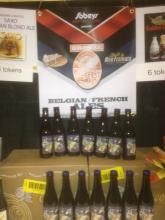 On the Web:
Bards Gluten Free Beer on SALE
Limited time offer for May 2013

In recognition of Celiac Awareness Month in the US, we are happy to offer Bards Gluten Free Beer at $14.95 per 6 pack throughout the month of May.  Not only is Bards the original gluten free beer, it is the beer of choice for celiacs in BC.